A House of Our Own: ¡Ándale, Prieta! by Yasmín Ramírez 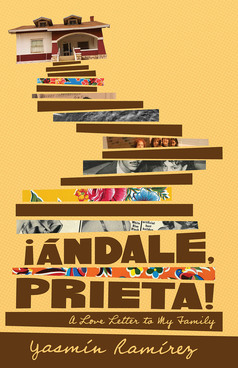 Photo credit: Lee & Low Books via https://www.leeandlow.com/books/andale-prieta
“Would I be like Ita, a huge wall of tough exterior protecting her from whatever made her eyes shine when she sang?”
—Yasmín Ramírez, ¡Ándale, Prieta! (Lee & Low Books, 2022)

Centering on her relationship with her grandmother, Yasmín Ramírez’s debut memoir ¡Ándale, Prieta! touches on everything from gender violence to food politics to the importance of religion.

Ramírez’s grandmother, Ita, is the focus of the first section of Ándale, where readers learn that she was forced to defend herself against several of her husbands, who physically abused her. Young Yasmín imagines her grandmother as a cool greaser chick fighting men, but, in our interview, Ramírez described how this romantic idea faded: “That marriage was an escape…not necessarily out of love,” she said. “...she couldn't deal with her mother and the horrible things that she would say.” Ramírez described the cultural pressure on Ita to conform to a maternal role and to “look the other way no matter what.” By putting these expectations on women, Latinx culture had a hand in this abuse, as it did in the abuses suffered by both of my grandmothers. However, neither Ita nor my grandmothers stop searching for love, a persistence that leads Ita to teach Yasmín not to look for a fight, but to “be ready if someone starts one” (chapter two).

This lesson is an effect of generational trauma explored in Ándale. Communication among the women in Yasmín’s family is strained, a struggle made visual in one conversation between Yasmín (on behalf of Ita) and her mother, Leticia. Leticia’s words climb diagonally as Yasmín’s trickle down, rendering the emotional distance between Leticia and Ita. However, they are more alike than they’d like to think. Ita’s mother disapproved of Ita’s first husband just as Ita did Leticia’s. And both show their love through gifts. “Even though they…didn't get along, they did truly love each other,” Ramírez told me. This is especially visible after Ita’s death, which I read about having just returned from my own grandfather’s funeral, making the scenes feel even more intimate and powerful: “My mom…curled herself onto her side, knees pulled into her stomach like a child, and began to cry,” writes Ramírez in a scene that parallels Ita’s reaction to her mother’s death (chapter 29). In many ways, these women carry on the legacy of their foremothers.

Another aspect of this memoir that I related to was the women’s conscious rejection of tradition. Leticia refuses to rely on anyone but herself. Ita lived with several men throughout her life, worked multiple jobs, and made the difficult decision to have abortions when she had no other options. The same spirit leads Yasmín to cut her hair, confront her absent father, and prioritize her happiness by pursuing writing. This career was subtly supported by her mother, who would “never take [her] books away” as a punishment (chapter 17). “I think [it was] because of my mom's own educational limits,” Ramírez told me. “My mom saw reading as an extension of [education]...she knew…where reading would lead me.” As I read about these women, I thought about the ways I’ve rejected tradition. I can’t cook, which, ironically, Yasmín does to feel close to Ita.

In Ándale, food is a prism of Yasmín’s culture. It’s a vehicle of sexism when Ita only serves her son his plate: “as much as [Ita] went against the grain, she clung to this business about men” (chapter 12). I recently witnessed the same treatment of men in my family; my cousin’s husband, who sat playing dominoes with the other husbands, was admired for waiting for his dinner to be served so his wife could finish her game of dominoes. And yet, food is also a symbol of love and tenderness, from the way Ita arranged cheese on Ramírez’s breakfast plate to the way Ramírez watches people enjoy her food. Whenever I prepare food, I also wait to watch the first bite. As Ramírez put it during our conversation, “It's such a pleasure to know that I put love into this and then someone’s enjoying it, and I think that's what would happen with my grandma…[food] was also her love language.”

However, food isn’t always positive in this memoir. The most unique chapter uses food to criticize the emptiness of religion. Yasmín eats a church, describing the flavors and textures of the pews, the windows, and God, but never feels satisfied. “That’s not God! He won’t fill you!,” she thinks as she hosts the communion at Ita’s funeral, which wasn’t held in her church because they disapproved of her cremation (chapter 28). Another negative culinary experience occurs at a dinner Yasmín has with her father’s family, who are surprised that she doesn’t put salt on her salad. Ramírez told me that was the first time she’d ever asked herself: ‘Wait, am I not Brown enough?’” This echoes the idea of only ‘half-belonging’ present in a lot of first-gen literature and highlights that, while food can bring one closer to their family and culture, it can also be a factor of separation.

As I read Ándale, I was surprised by how deeply I was able to relate to Yasmín, from her fear of her mother dying at work to the way she dressed as a teenager. After telling this to Ramírez, she shared her thoughts on diasporic literature: “I wrote a book that I needed to find…Sometimes I feel isolated from first-gen stories…but then we have some similarities… I hope more people…connect with parts of this story.” The implications of culture are definitely present in this memoir, but, at its core, this is a book about love– its anger, its care, its pain, and all the ways we choose to love others and ourselves.

¡Ándale, Prieta! comes out April 19 (pre-order here!). In the meantime, check out another heart wrenching and intimate memoir about familial love: The Glass Castle by Jeanette Walls.

Thank you to Lee & Low Books for the review copy and to Yasmín Ramírez for the Zoom interview!

Brittany Torres Rivera is a Puerto Rican writer whose work deals with culture, family, and (un)belonging. She has a BA in English with a concentration in Creative Writing from Florida International University. She is based in Orlando, FL.

Posted by Brittany Torres Rivera at 11:06 AM