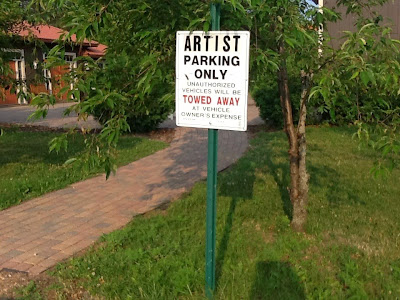 The John K. Walsh Residency Fellowship, named after Notre Dame alum (’61) and hispanista Jack Walsh (1939 -1990), is an annual Letras Latinas program that supports a Latino/a writer working on a first book. Specifically, the support is a one-month residency in July at the Anderson Center in Red Wing, MN.

The 2014 Fellow was poet Luisa Caycedo-Kimura. She agreed to take a few questions about her experience last summer.

LCK: At Ragdale, they have t-shirts that say “time + space.” I would add the word “peace” and say that is precisely what I found in both places. The Anderson Center and Ragdale both strive to create an environment that is conducive to producing creative work. In each place, I had a comfortable private room in a gorgeous historical mansion surrounded by extensive grounds. At Ragdale, there are manicured lawns, a sculpture garden, and acres of meadowland. The grounds at the Anderson Center consist mostly of lovely tree studded manicured lawns, a large sculpture garden, interesting buildings, a tree preserve, and a fitness trail. Both places have a pantry and refrigerator full of delicious healthy food available to the residents day and night, and a professional chef prepares dinners Monday through Friday. There are books and journals available for borrowing, art everywhere, and bicycles exclusively for residents’ use. Behind the grounds of the Anderson Center, there is one of the best bike paths I have seen, and if you have a car (or are a strong biker), the center of Red Wing and the bluffs are not far. Ragdale is within walking distance to Lake Forest’s town center.

Most importantly, my main responsibility was just to be a poet. At both places, I was able to slow down and notice the way the light hit the grounds and the architecture. While I was at Ragdale, the cottonwood pods were releasing their seeds, and I could observe as the wind made them dance through the air like fireflies. Twice, on walks through the meadows, I found myself surrounded by yellow butterflies. It’s as if I were Mauricio Babilonia in Gabriel García Marquez’s One Hundred Years of Solitude. At The Anderson Center, I saw a thirteen-stripe squirrel. I didn’t even know they existed! I also saw bald eagles and on the bike trail a beaver. There was so much art and nature to relax and inspire me.

At Ragdale, there were thirteen of us sharing three houses. That was probably one of the main differences between the two places. I was in the main house with five other writers. Each of the rooms is comfortable and unique, some have private balconies or decks, and each has a private bathroom. To make sure no one is disturbed while working, there are rules about how much noise one can make on the premises. At times you could almost hear the others breathe. Of course, if you are tired of the silence, you can go outdoors or to one of the kitchens and invariably find another resident or one of the employees. At the Anderson Center, there were only six of us at any one time living in the huge mansion. Since only two of us were writers and the other residents had their music or art studios away from the house, there was no need to have rules about noise. In fact, except for meal times or coffee breaks, the house was almost empty. Even when people were there, because of the design of the house and the small number of residents, I rarely heard anyone from my room or my favorite work and reading areas throughout the house. 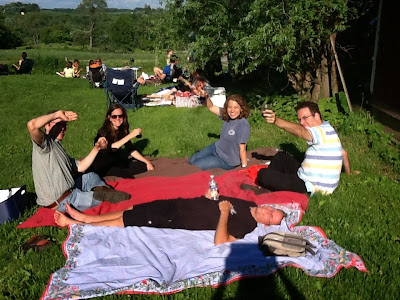 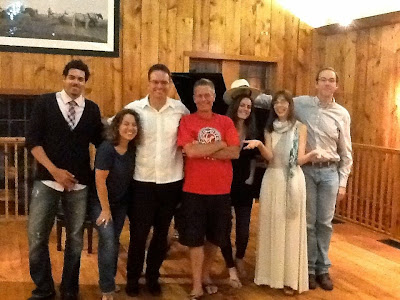 LL: I’m going to venture a guess that your one-month stay at the Anderson Center allowed you to develop something of a routine, both for writing, reading, and perhaps other activities?  Could give us a sense of how you spent your time?

LCK: Although I don’t consider myself a terribly structured person, I believe we all have a natural rhythm that allows us to be at our creative best. I like to write in my journal as close to the start of my day as possible, while I have a cup of coffee. I’m a huge advocate of early morning journaling. I’ve done it for years and find it extremely helpful. Beyond that, my preferred work rhythm isn’t always attainable in my everyday life. That was one of the major benefits of being in these residencies. I was able to follow my own rhythm. At the Anderson Center, my favorite place to journal was the upstairs sitting room. It’s a peaceful, sunny, spacious room with a comfortable loveseat, a wingback chair, and lots of poetry books. After journaling, I read before writing. I like to start writing by editing drafts, unless inspiration strikes at any time prior to that, in which case, one should never keep the muse waiting. My afternoons were somewhat less structured, but usually involved reading and writing away from my room and some sort of outdoor activity, such as biking, exploring the property and its surroundings, climbing the water tower, etc., or spending time with other residents. Tom Virgin, a print maker and five-time resident at the Anderson Center, had copies of books he had made and encouraged me to spend time in his studio perusing them. Other times, I would listen to Michael Tsalka (a seven-time resident at the center) play the piano. He was always happy to have an audience. Other times I would listen to his wife Angelica Minero Escobar, a musicologist and vocalist, practice her singing. The only externally imposed structure was dinner with the residents Monday through Friday. After a leisurely dinner, I usually went back to my room for writing, reading, and exercising. I brought a travel yoga mat that proved invaluable. 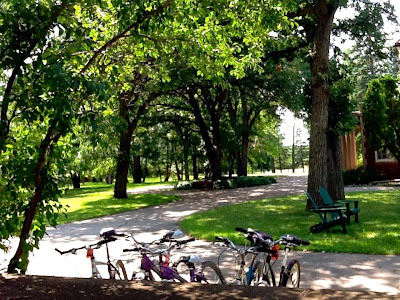 LL: The John K. Walsh Residency Fellowship is meant to assist a Latino/a writer working on a first book. Could you share with our readers what your first book project is, and how it’s coming along?

LCK: I’ve been working on a manuscript that focuses on some difficult topics –– loss, abuse, domestic violence, depression, and a general sense of not belonging. Some poems are set in Colombia, some in the United States. I’m close to finishing, though I believe there are still a few gaps that I need to fill to make it more cohesive. I’m certain that I would not be this far along with my book had it not been for the John K. Walsh Residency Fellowship.

LL: An integral part of this experience, I imagine, is being in community with other artists. Could you say something about what that was like, with a particular focus on your experience at the Anderson Center since you were there for one month?

LCK: Being a natural recluse, I have to admit I was a little apprehensive about living with a group of strangers and having dinner with them every night. It’s not that I’m shy or that I dislike people. I just tend to need a lot of alone time. Interestingly, the people I met hold my fondest memories of that summer. In both places, we bonded quickly. At the Anderson Center, of course, I had more time to get to know the other residents, and it felt as if we were a family — in a good way. In addition to Tom, Michael, and Angelica, whom I mentioned earlier, there was also Lisa Weider, a young visual artist from Austria, and two fiction MFA students from the University of Minnesota. The latter two, John Costello and Jonathan Escoffery, split the residency. Each was there for half a month. Often, I sat at the kitchen peninsula for conversation and coffee with Lisa or John. At the Anderson Center, every resident is required to do a small community service. I was asked to read at the Center’s summer arts festival, and I was touched that everyone in my little “family” stopped what they were doing (Tom and Lisa had open studios that same day) to attend the reading and lend their support. On weekends, although we didn’t need to, we would cook together and share a communal meal. Several times we even had visitors. They were writers that Tom, Michael, and Angelica had met in past residencies. One of those former residents was Jacob Saenz, the 2011 Letras Latinas Fellow! There is something so inspiring and motivating in sharing time with other creative people.

One Sunday, in a bit of a role reversal, we had our chef, Amy, her husband, and son, join us for a dinner that we prepared. In many ways, we considered Amy to be part of our group. At the end of the month, all of us July residents organized a “Meet the Artists” event at the barn, where we shared our work with the public. Robert Hedin, the director, and other members of the staff and board were there, as well as some of the permanent residents who rent artist space at the center. I can’t say enough about the people at both residencies. Everyone was warm and welcoming.

LL: It’s my understanding that these have been your first experiences (at Ragdale and the Anderson Center) with artist residencies. What advice would you give to a writer who has never done one of these residencies, and who is thinking about applying to do one? Is there anything you might do differently on your next residency, assuming you’d like to do another one, at some point?

LCK: The first thing I would tell someone considering whether or not to apply for one of these residencies is “Go for it!” Each place seemed like a bit of paradise. For those planning to do a residency, I would pass on two pieces of advice that I received. The first came from my husband, an artist. He said, “The first week may end up being a throw-away in terms of creative output. It will likely take you a while to unwind. Accept it. Don’t put undue pressure on yourself.” The second came from Regin Igloria, the Director of Artists-in-Residence at Ragdale. He told us to first catch up on our sleep. This was all sound advice. By giving myself permission to just enjoy the “free time,” I ended up having a productive, relaxing, and joy-filled first week.

In the future, I would like to see if I could do a residency with my husband. Prior to this summer, I didn’t know whether that would be possible or even desirable. But, in each of the residencies, there was a married couple. At Ragdale, the husband and wife were Eric Moe, a composer, and Barbara Weissberger, a visual artist. At the Anderson Center, it was Michael Tsalka and Angelica Minero Escobar. One reason I believe it worked well was because each individual had his or her own workspace. Aside from the possibility of doing a residency with my husband, I would consider packing fewer books. I spent so much time deciding which books to pack, and I barely even looked at them. Ragdale and the Anderson Center both have great selections of books and journals available to the residents.

To this end, we have created
The John K. Walsh Mentorship Essays,
a collaboration with the online component
of Origins, a new literary journal.

To learn more and read the inaugural essay
in what will be a quarterly series,
CLICK HERE.
Posted by Francisco Aragón at 3:40 PM