Please welcome Emma Trelles to LETRAS LATINAS BLOG. That is, readers will be able to enjoy her literary journalism as she begins to contribute occasional, hopefully semi-regular pieces to this space. The subject of her first contribution, in this case an interview, is the poet-critic Emily Pérez.
*
Emily Pérez grew up in the Rio Grande Valley of South Texas. She graduated from Stanford University with a BA in English and earned an MFA in poetry at the University of Houston, where she served as a poetry editor for Gulf Coast and worked as a writer in residence with Writers in the Schools. A scholarship recipient of the Summer Literary Seminars in St. Petersburg, Russia, and Bread Loaf Writers Workshop, she has also been a member of the Community of Writers at Squaw Valley. Her book reviews have appeared in Latino Poetry Review, American Letters & Commentary, and Gulf Coast, and her poetry has appeared in Crab Orchard Review, Borderlands, The Laurel Review, DIAGRAM, and other journals. Her manuscript was a finalist for the Andrés Montoya Prize as well as a semifinalist for the Crab Orchard and Zone 3 prizes. 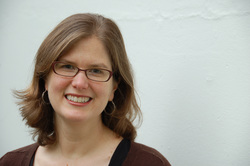 In 2011, her chapbook, Backyard Migration Route, was released by Finishing Line Press. She teaches English, poetry, and gender studies in Seattle where she lives with her husband and son. In this interview, conducted over the phone one afternoon last December, Pérez talks about the serendipity of publication, unintentional passing, Elizabeth Bishop, podcasts, and how fairytales are helping to shape her newest manuscript.
—Emma Trelles
ET: This is your first collection of poems, and I'm wondering why you decided to publish a chapbook instead of holding off for a full-length collection of poems. I am enamored with the chapbook for a lot of reasons: it feels more like a unexpected find than a longer collection, a more personal artifact, as if there is less separating the reader from the writer. Chapbooks are also often little works of art, as yours is with its slim green ribbon and photo-collage cover. Did this medium's particular sense of intimacy and visual impact inform your decision to publish in it? Were there other factors?
EP: It's a little bit of the chicken and the egg. I'd been trying to get my manuscript published to varying degrees of not quite success. I thought I needed to take a break and do something different, try something else and go back to the manuscript later. Around the same time I made that decision I connected with a colleague who makes handmade books. She usually makes blank books but was getting tired of it. She asked me to give her some poems to put in a book.  It was before Christmas one year and I thought ‘Great, I can give one to my parents maybe a few other people.’ It really was this idea of an intimate production - there was only going to be about 10 books. I had these long poems that were originally in my manuscript but no longer were, and I knew they would never be published in a magazine because they were too long. So I thought, ‘Why not put them all together and give them to her?’ I did that, and it was about 30 plus pages. Then, I realized, ‘Hey, this is a chapbook!’
I could only see how the poems would work after they had taken that shape. And I sent it out to see what would happen, essentially, at a friend's prompting, who is not in the poetry world but in the book arts world. A book artist pointed me in the direction of the chapbook. 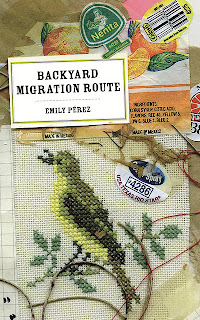