Progress of a Poet: Oscar Bermeo 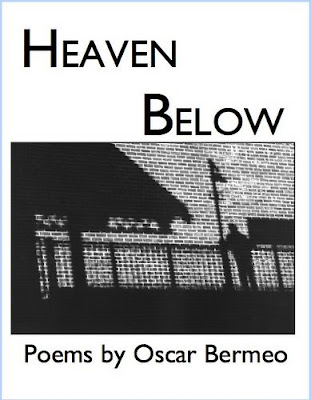 In Anywhere Avenue, it was "Sonnet for the Lexington Avenue Express--Mt. Eden Stop" with its use of form to inform---in the speaker's case, the exhilaration of riding public transportation without paying a dime. In Palimpsest, "Fire Escape" is a long piece that relied on a particular brand of repetition that's pulled off admirably and which I'd read in a literary journal. There were others I enjoyed, to be sure, but these are the pieces that immediately come to mind.

I'm speaking, of course, of Oscar Bermeo's collections. He seems to be putting them out at regular intervals and I've come to look forward to them. I was delighted to find Heaven Below in my mailbox at work a few days ago. Before I say something about about a couple of the poems further below, I want to say something about what I'm coming view as a particular gesture of generosity in putting these out in this fashion: I especially enjoy and appreciate Bermeo's attention to particular details, from the copyright page which states:

This work is licensed under the Creative Commons Attribution-Noncommercial-Share Alike 3.0 United States License. To a view a copy of this license, visit http://creativecommons.org/license/by-nc-na/3.0/us/ or send a letter to Creative Commons, 171 Second Street, Suite 300, San Francisco, California, 94105, USA.

To the dedication on the same page, which reads:

For Jack Agüeros, the poet activist who taught me to write sonnets and psalms.

To the inside cover at the back, where he's been including, in addition to the habitual acknowledgments and expressions of gratitude.... another section he calls "Influences." It reads:

I hadn't given these sections much thought until recently. In an interview I read many many years ago, Thom Gunn asserts, matter-of-factly, that he considered himself a "derivative poet." He meant it as a positive---that he was part of a tradition and didn't write in a vacuum, and he wasn't shy about stating which poets he strove to emulate and was inspired by. Bermeo recently mentioned on his blog that one of the items of feedback he got at the recent VONA conference was that he

need [ed] to get past [his] attribution poem phase. [He's] imitated and borrowed from a variety of authors but [he] need[s] to risk more and trust in [his] voice.

I might have said: keep doing what you're doing because you're doing it well, AND consider venturing beyond what might be considered a comfort zone. And yet when I read that list of influences above, I read a serious and dedicated artist who is wonderfully promiscuous.

Which is a good way to transition into two terrific poems that illustrate, I think, what I mean by Bermeo's promiscuity. First off, one of the things I love about these collections is how they mix their genres: verse and prose, prose and verse. "Ash Wednesday," a prose poem is an absolute gem. It starts:

and continues on, bereft of any punctuation whatsoever, ending:

I was reading this and no: I wasn't thinking or hearing Eliot. I was thinking and remembering:

But I wasn't reading James Joyce I was reading Oscar Bermeo but also hearing Joyce and hearing Bermeo and enjoying it very very much very. Having said that, it's crucial to underscore that what seduces me about "Ash Wednesday" isn't the mere fact of this punctuation-less, stream-of-consciousness technique, but rather Bermeo's careful and effective deployment of it. The words are carefully placed so that the reader is invited to collaborate: through the poet's very deliberate use of word and phrase repetition, readers are playfully challenged to provide their own pauses and stops---in short, to join forces with the poet to help create the poem's own organic rhythm and grammar. It's this process of physical collaboration (speeding up, slowing down) that produces the poem's aesthetic pleasure. Indeed: as I progressed, it felt like I was uttering a prayer.

"Orchard Beach: Section Four" (After Robert Francis' "Silent Poem") has not, as of yet, prompted me to go seek out Francis' poem. I love the poem without knowing its inspiration. I love its particular "meter:" its use of two-syllable words in "lines" that alternate between four words/two words/four words/two words. Sometimes they're verbs; sometimes their nouns. What they share in common is that they are all (with the exception of "orchard," which frames the piece) compound words, words made up of two words. (I thought of Heaney; I thought of Pound's ideogram....) And I was thinking about the song "Under the Boardwalk" as I read:

It's Bermeo trying this or that poem on for size, but bringing his baggage---and I mean baggage in a good way--- to the piece, transforming it, making the work his own.

Posted by Francisco Aragón at 10:02 AM

I admire Bermeo's attention to detail as well; the acknowledgments, influences, dedications. What drew me in to PALIMPSEST was the many interesting definitions of the word 'palimpsest.' It definitely set the mood for the sonnets, psalms, prayers and epiphanies that follow.

I request you to do the favour. Please place my blog link in ur blog and below is my high school information blog California High School