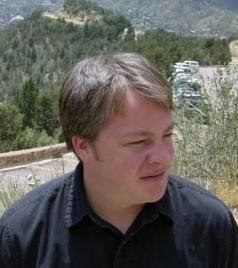 Before I had the pleasure of meeting John Chávez in person, I read him, and heard about him from third parties. I read his Noemi Press, chapbook, Heterotopia, which is reviewed in Latino Poetry Review, number 2 by Peter Ramos. Carmen Jiménez Smith, who knew John while he was pursuing his MFA at New Mexico State University, spoke very highly of him. And fellow Macondista, Joy Castro, told me about him since John was pursuing his doctorate at the University of Nebraska in Lincoln, where Joy teaches.

I finally had the pleasure of meeting him in Omaha, NE about a year ago when I was at the Bemis Center for Contemporary Art to give a reading. He drove over from Lincoln and we had dinner and hung out for a few hours. The following is a brief intervew with him conducted over e-mail a few days ago.

John, I'm glad to hear that you are having a productive time during your Letras Latinas Residency Fellowship period at the Anderson Center. The principal aim, of course, is to give an emerging Latino/a writer quality time to work. Can you share with readers of LETRAS LATINAS BLOG what you have been working on this past month, and your hopes for this particular project?

Knowing my Master of Arts and Master of Fine Arts theses weren't so much book mansuscripts as they were collections of poems, I've worked in the last month to conceive, reconceive, draft and revise my doctoral dissertation, which I plan to be my first full-length book. Trying hard to have no preconceived notions in mind, I arrived at the Anderson Center on June 1st & brought what felt like a skelton of a draft. I had the shape of the book in mind, but I didn't want to force it so much as follow the book's energy to completion. Nearing the end of the residency however, and much to my surprise, I've written what feels like a strong, working draft of the book manuscript, tentatively titled Dawn of the Dispensable City. With some more tightening and a bit of planning, I hope to send it out to a number of writing contests this coming fall.

As I understand it, this is your first experience with an artist residency. How has it been? Could you describe a bit how your time evolved, if you developed any particular routines as the month progressed.

Yes, this was my first experience with an artist residency of this nature, so I didn't know what to expect. To Letras Latinas and the Anderson Center's credit, the month was amazing! The day I arrived, Robert Hedin, the director of the Anderson Center, gave us five residents a tour of the grounds. Starting with the main house and finishing with the individual studios, Robert recounted the history of the Anderson Center—built by his grandfather A.P. Anderson—and its tie to the community of Red Wing, MN.

By the second day, work was calling. I started by spreading the manuscript out across the floor of my bedroom and reading it aloud. This exercise allowed me to hear the poems, word for word and line for line, and to see how the shape of the book was driven by the initial organization. Once I drafted, which was every day, I spread out individual sections to see where they were headed.

I used this routine as a model to continue to imagine the book, to listen to where particular poems might be placed. Once I wrote a new poem, I read each section of the book to see where the poem best fit. Though the process felt methodical, it in fact turned out to be more organic—in essence, the new poems entered the manuscript on their own terms. Not mine.

The Anderson Center residencies are rather small in that at any one time, there are only five artists in residence. Could you talk a bit about what that experience has been like, and what kind of connections you’ve made, and if you foresee any of these connections lasting beyond the residency experience.

Not having been in residency before, or in an artist's community with so few people, I really didn't know what limitations such a number would pose or what kind of bonding would take place. I'd have to say that my four housemates and fellow artists and I bonded rather quickly. We were all on such different timetables career-wise, but at what place we were didn't matter. We were more interested in each other's art, conversations about art, politics, identity and culture and the confluences of each that we felt like our concerns were intellectually similar.

The poet Ronaldo Wilson and I discussed a number of issues, including being a member of a minority community and poets interested in the avant-garde. He was wonderful to talk to and because of our similar concerns and interests as poets, we shared email addresses and information about upcoming conferences meant to highlight such cultural work. Also, my fellow writer Kate de Gutes discussed the spaces in which we are allowed and seemingly disallowed to be or become ourselves, a central concern and meditation of my manuscript. In short, they were both marvelous, giving people to meet.

As far as the visual artists, both Ellen Petraits and Joyce Ellen Weinstein were awe-inspiring. They opened up their studios a number of times to share with us their process and projects' composition. These nights usually ended with us talking until midnight about our lives, the lives of others, and how our interaction with world informs our art. I couldn't have asked for better people to spend time with in residency.

Another part of the experience at that each resident has to do some sort of "community service" while they are there. What did you do, and how did that go?

I spent some time with a number of families at St. Joseph's Catholic Church, and the nature of my time centered on talking about my educational experience and the hardships I've faced to become a first-generation college graduate and doctoral candidate. Adriana Thuerauf was my host for the evening and translator, and she was simply remarkable as both a person and community activist.

Having lost my language (Spanish) at an early age, I discussed how my educational experience shaped me and how my experience might parallel my guests' kids' lives. From what I understand there are very few Latinos living in Goodhue county, and of those who attend high school some don't finish.

I was lucky in that my surrogate high school counselor, Carlos Montoya, pushed me to have higher expectations of myself. It was this kind of support from my educators and family that I wanted to share with Adriana's parish.

Now that you have experienced a month-long artist residency, what advice might you give to next year's recipient of the Letras Latinas Residency Fellowship or, for that matter, any writer coming to an artist residency for the first time?

Speaking of residencies, the Alliance for Artists Communities has recently announced that their Midwestern Voices and Visions initiative, with funding from the Joyce Foundation, will be accepting applications for their next grant cycle. I was fortunate enough to receive one of these in 2006. I did my residency at the Anderson Center----which directly resulted in establishing the Letras Latinas Residency Fellowship. Below is the link with all the pertinent information. In a nutshell, it is a program aimed at supporting artists of color who live in a midwestern state who have never experienced an artist residency. Please spread the word. The deadline is in mid-August:

http://www.artistcommunities.org/MWvisions/index.html
Posted by Francisco Aragón at 11:49 AM